De Hoop Nature Reserve is blessed with a wide variety of habitats, from the beautiful sandy coast and the tall green mountains to the winding Vlei. This diversity creates many ecosystems that are home to 260 bird species. De Hoop is a clear-cut birder’s paradise.

The De Hoop Vlei is a RAMSAR-designated site. It was signed in 1971 in Ramsar, Iran. Today, 170 nations are signatories to the Ramsar Convention. At its peak, the vlei has known to support over 30 000 birds at one time, but, on average, it is home to 8 000 feathered creatures. Regular sightings in the marshland include Red Knobbed Coot (Fulica cristata), Egyptian Goose (Alopochen aegyptiaca), Yellow Billed Duck (Anas undulata), Cape Shoveler (Spatula smithii) and the Cape Teal (Anas capensis). The Vlei is also home to larger bird species, like the Great White Pelican (Pelecanus onocrotalus) and the magnificent Greater Flamingo (Phoenicopterus roseus). In the years back in the early sixties, the De Hoop Vlei was the only site where the Greater Flamingo was able to breed successfully. 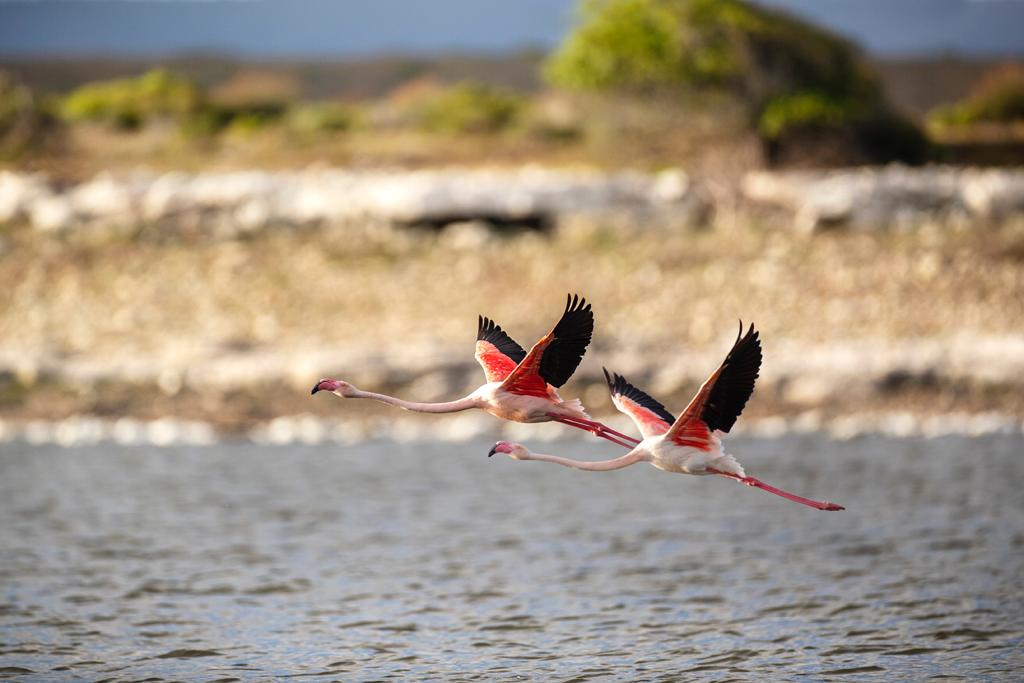 Situated along the Southern Cape coast, Morukuru Family De Hoop falls within a protected marine area, including terrestrial tracts, and stretches five kilometres out to sea. This encourages the Southern Right whales to migrate to these waters to give birth and also encourages coastal bird life. Our visitors will likely see a few Cormorants species, such as the larger White Breasted Cormorant (Phalacrocorax lucidus), the smaller Reed Cormorant and the in-between and not-often-seen Crowned Cormorant (Microcarbo coronatus). Another noteworthy bird is the African Black Oystercatcher (Haematopus moquini). In 1998, the African Black Oystercatcher was declared a threatened species due to a diminishing population. Luckily now the numbers are on the rise due to the efforts of the Oystercatcher Conservation Programme and increased food availability. Thankfully this species is currently listed as Near Threatened. This is a positive sign that our coastlines are ecologically thriving. Other birds along the coast include Sanderlings (Calidris alba ), Greater Crested Tern (Thalasseus bergii), Kelp Gulls (Larus Dominicanus). 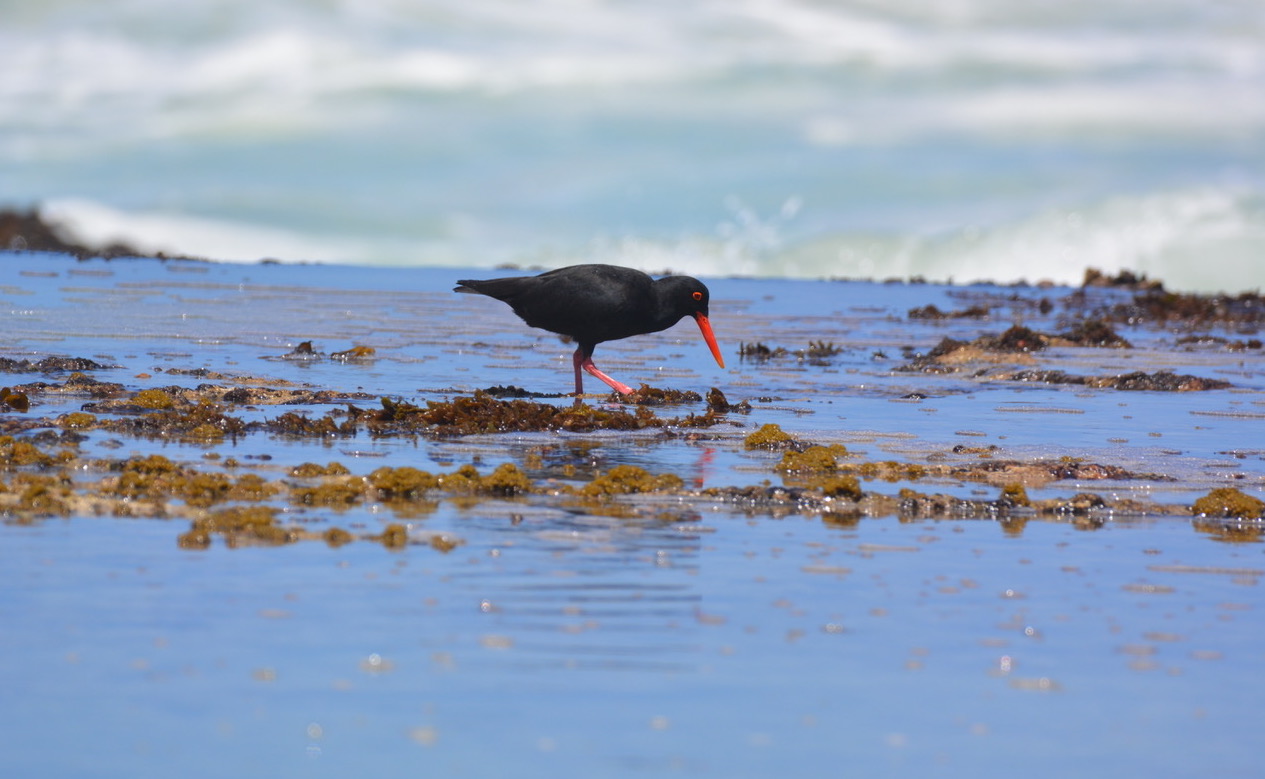 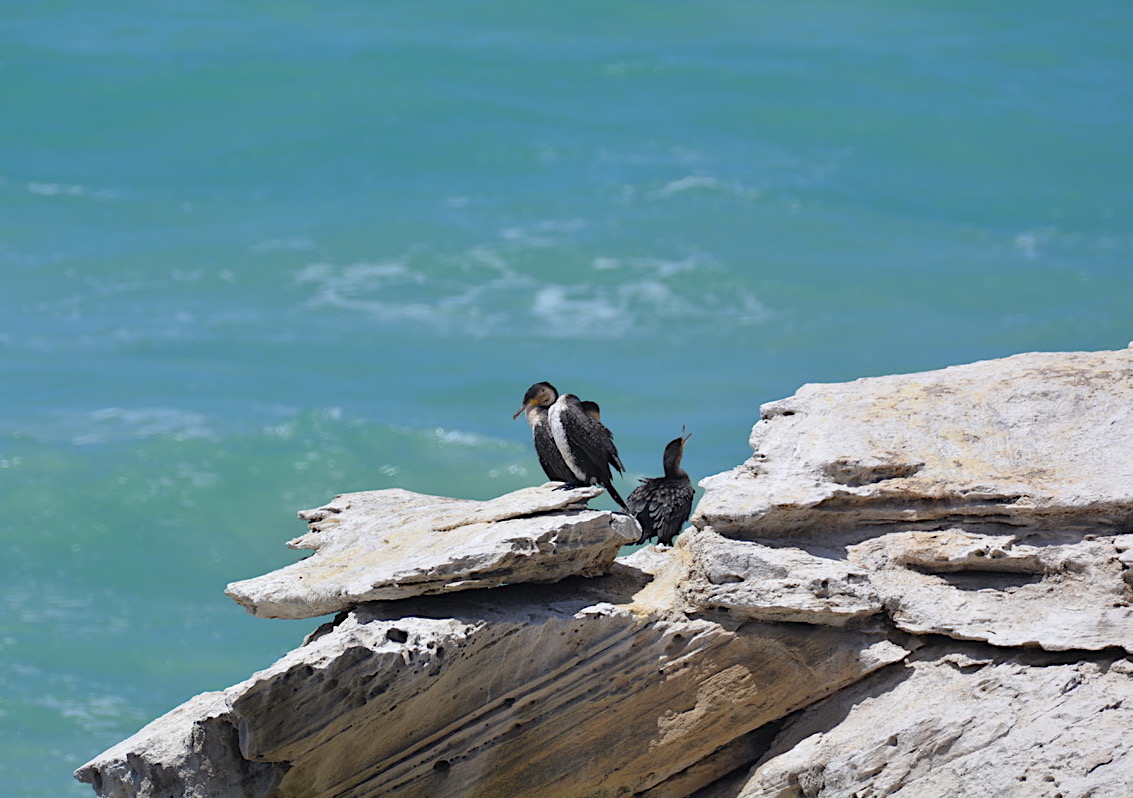 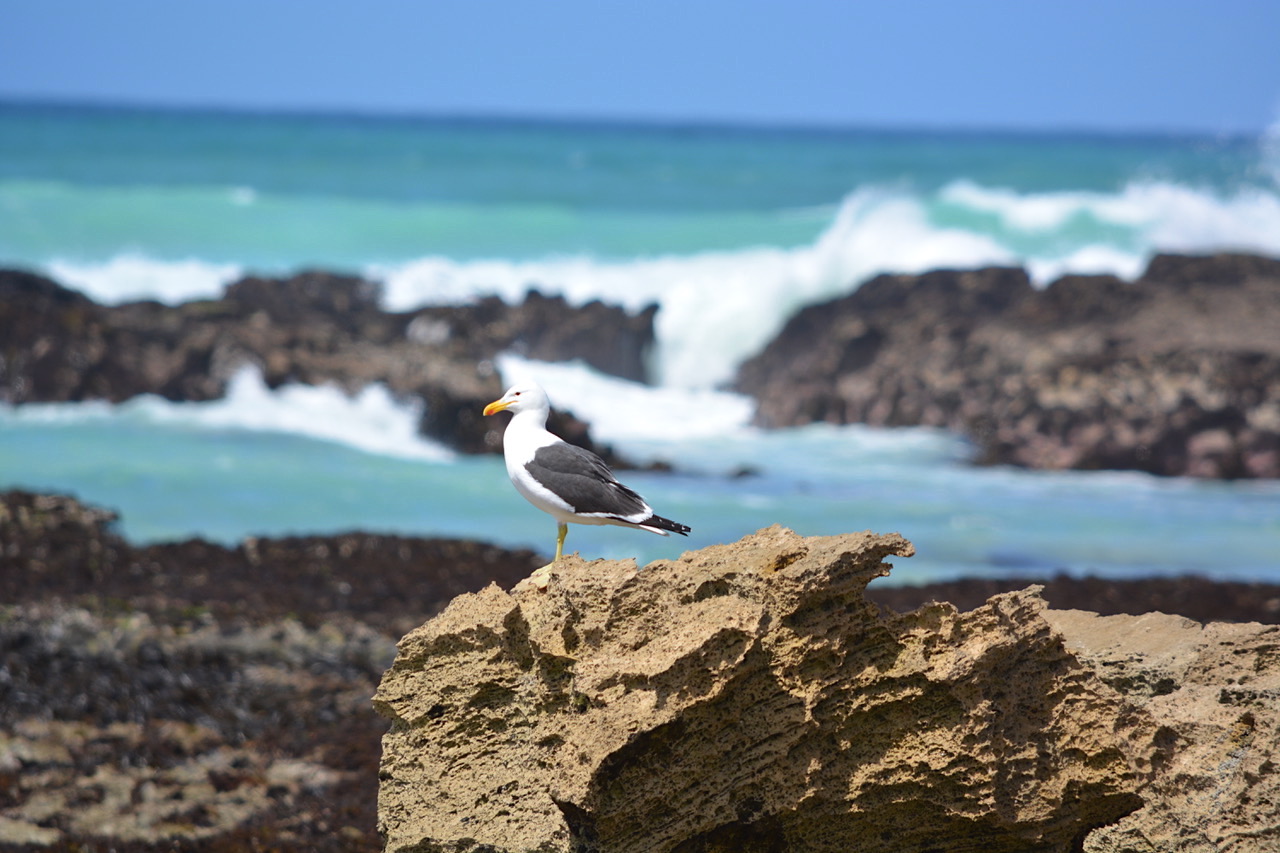 Morukuru Ocean House and Morukuru Beach Lodge offer guests a unique opportunity to see the rare Cape Vulture in its natural habitat. The Potberg trail, which is in the Eastern part of the nature reserve, is a must for keen amateur ornithologists. This Cape Vulture (Gyps coprotheres) colony is the only surviving breeding colony in the Western Cape. With over 200 breeding pairs, it is a massive conservation success, aided not only by the efforts of Cape Nature De Hoop reserve but also by neighbouring farmers, who leave out carcasses of dead livestock for the vultures to feed on. Locals are also choosing not to use poisons so as not to harm the vultures who are scavenging on their land. Cape Vultures are massive birds, and they have a wingspan close to two and a half metres. If you are lucky enough to get close, you can hear the wind rushing under their wings as they fly above. 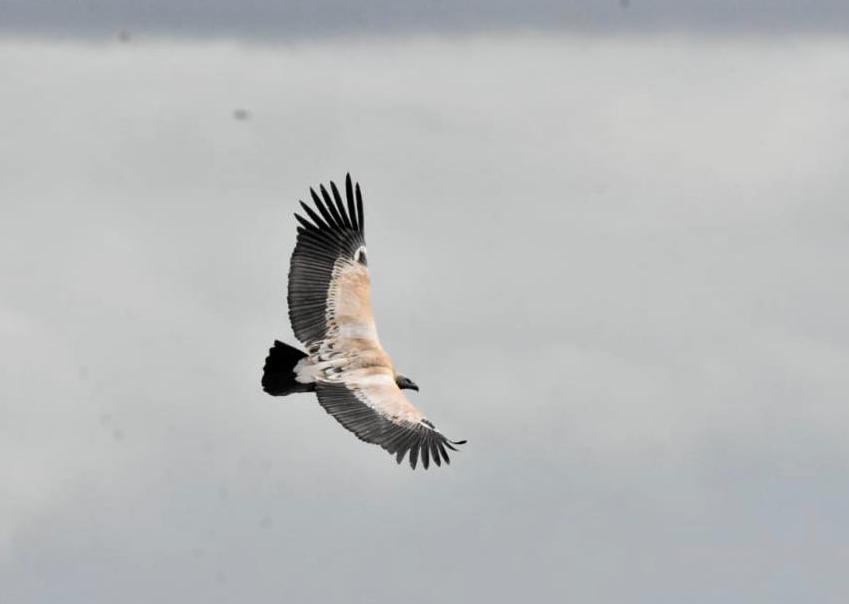 Morukuru Ocean House and Morukuru Beach lodge are surrounded by vast stretches of indigenous Fynbos hosting a variety of terrestrial birds. Examples include Bokmakierie (Telophorus zeylonus), a bird whose call is frequently heard, Capped Wheatear ( Oenanthe pileate), Cape Sugarbird (Promerops cafer), Cape Grassbird (Sphenoeacus afer) and the Southern Fiscal (Lanius collaris). The Western Cattle Egret (Bubulcus ibis) is regularly seen following the larger mammals around, waiting for them to disturb the insects so they can eat them up. You can't ignore the well-known South African alarm clock bird, the Hadeda Ibis (Bostrychia hagedash) or the ever so adventurous and cheeky Fork-Tailed Drongo (Dicrurus adsimilis), who you can either hear mimicking other bird species call or mobbing birds of prey. Birds of Prey are an important group, and excellent sightings are common. 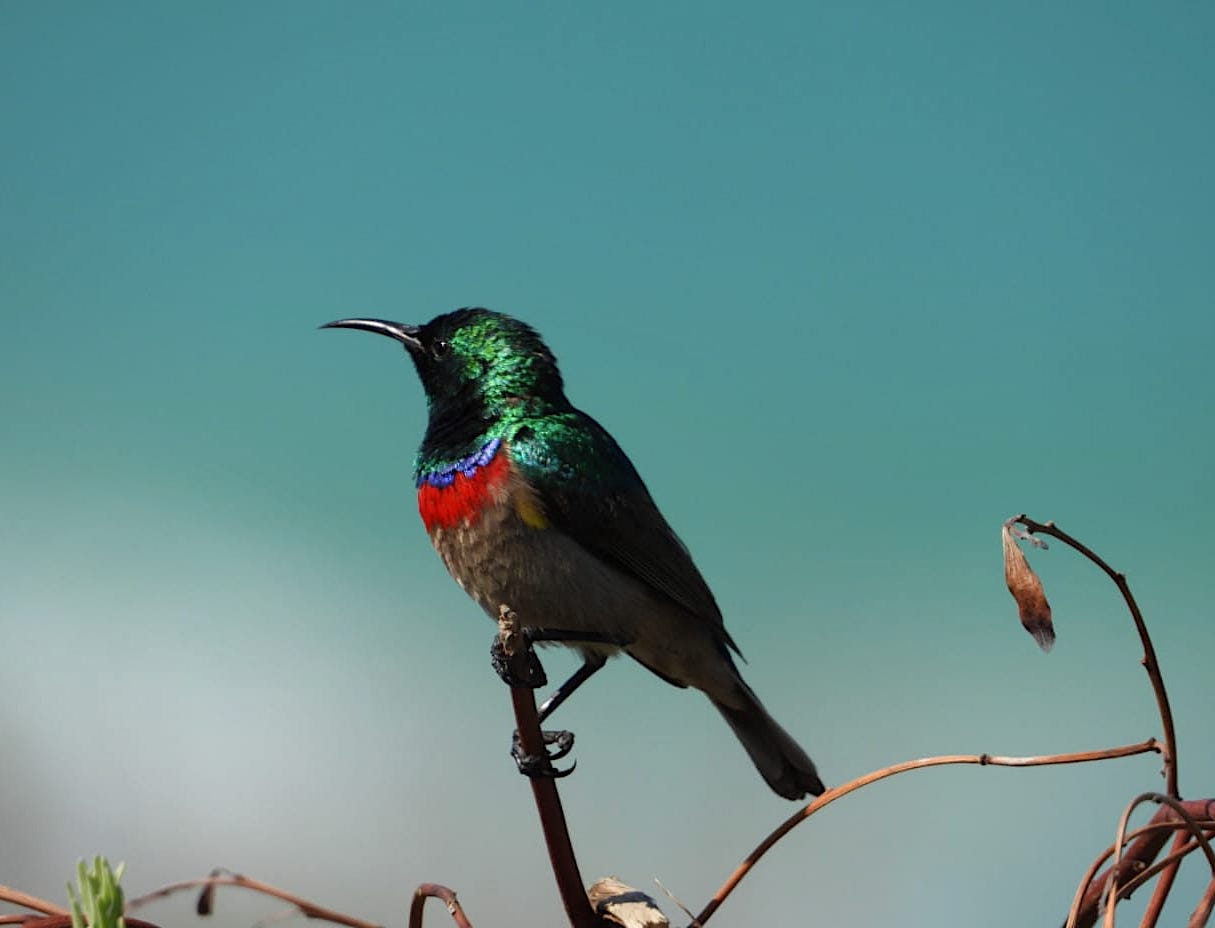 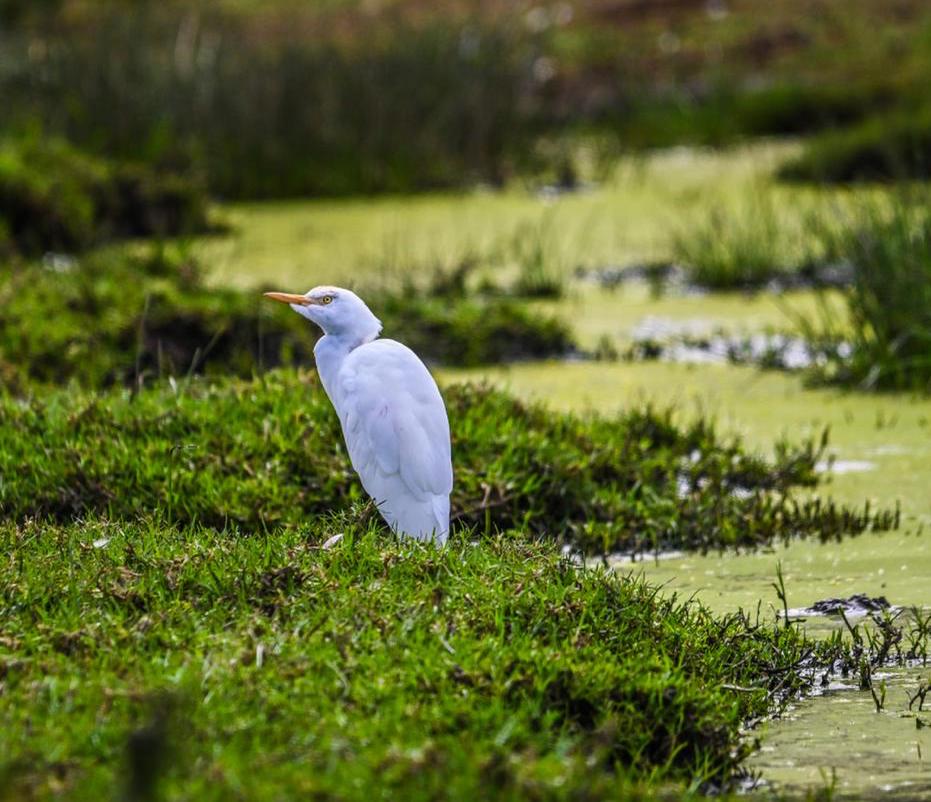 Being so close to the coast, we often get strong winds blowing inland from the sea. Birds of prey thrive in these conditions as it assists them in hovering when scouting for game, such as mice, snakes, lizards, geckos and maybe even hares for the larger species. Common birds of prey that could be seen include the Jackal Buzzard (Buteo rufofuscus), whose name derives from its Jackal- like call, the migratory Common Buzzard ( Buteo Buteo), African Harrier Hawk (Polyboroides typus), Lesser Kestrel (Falco naumanni), Rock Kestrel (Falco rupicolus) and the Black-winged Kite (Elanus caeruleus). The Spotted Eagle Owl (Bubo africanus ) will also start to show itself at dusk. In addition, keep your eyes peeled for the occasional secretary bird (Sagittarius serpentarius), who uses its powerful legs to kill snakes for a tasty snack. 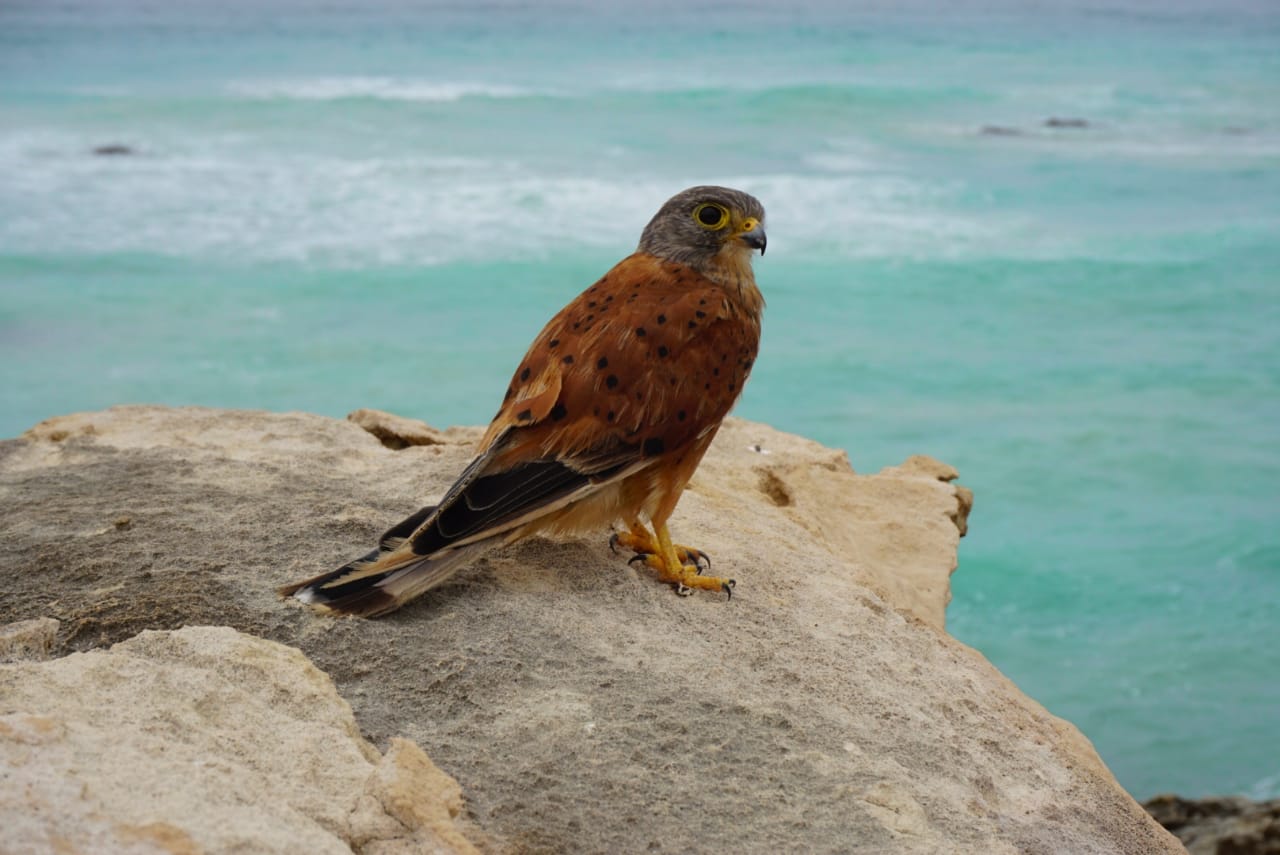 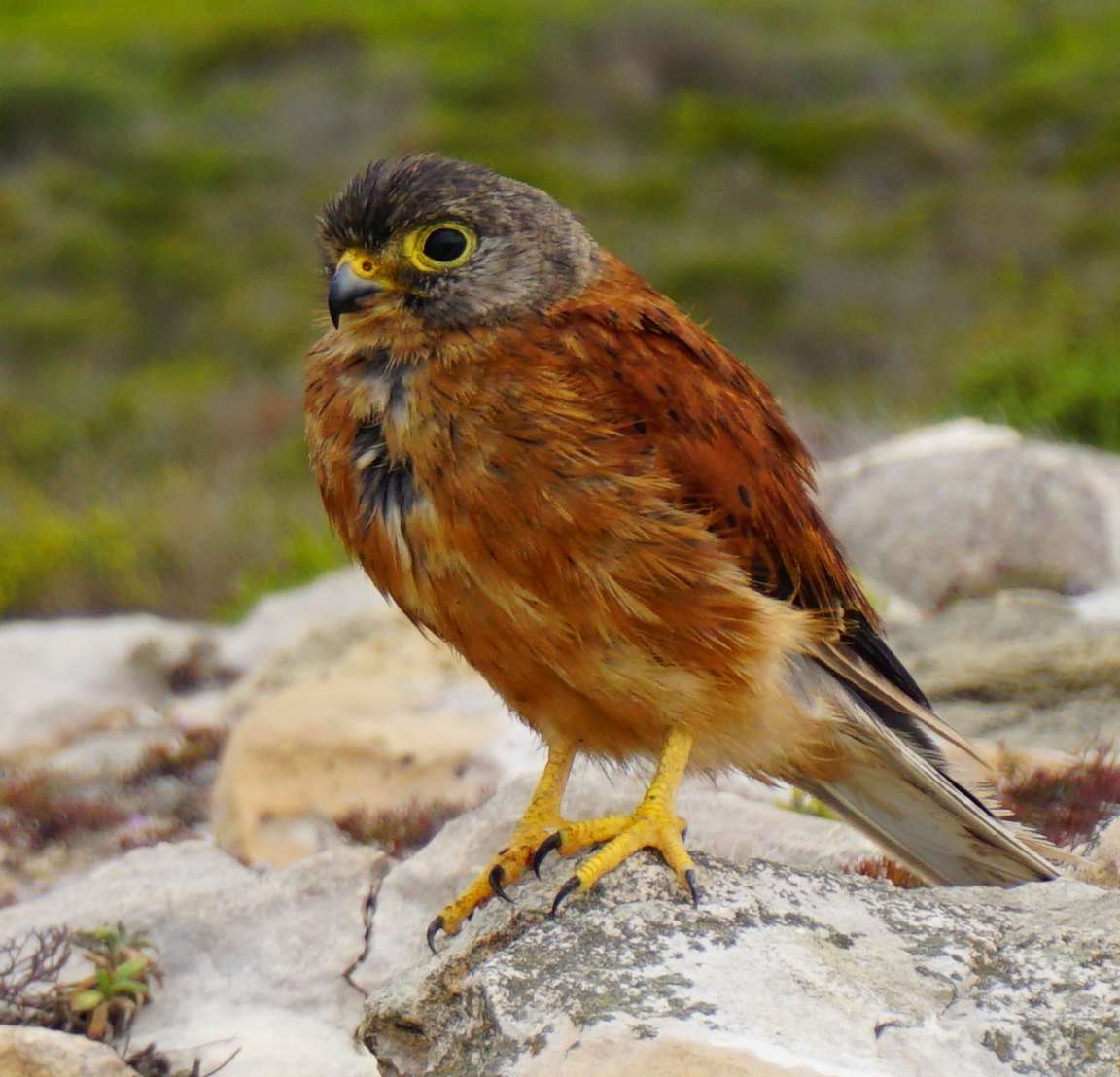 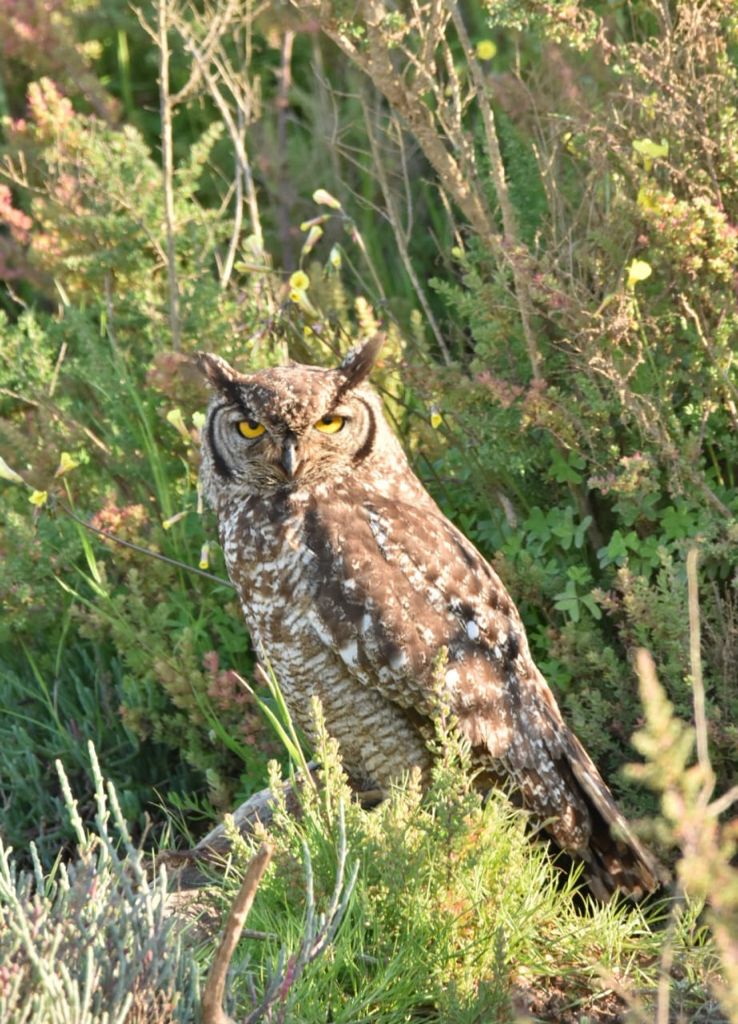 Visitors to Morukuru Ocean House and Morukuru Beach Lodge can indulge in gentle bird spotting from the balconies. Birds frequently seen around the properties are Greater Double Collared Sunbird (Cinnyris afer) and Cape Robin Chats (Cassypha caffra). Don’t miss The Cape weavers (Ploceus capensis), whose beautifully woven nests can be found in the Milkwood trees outside the lodge. The male Cape Weaver creates nests; he will build 5 to 7 nests hoping that a female will approve of at least one and mate with him. If she disapproves, he will break them down and start again. Also, watch for the noisy but stunning Red Winged Starling (Onychognathus moria), Cape Bunting (Emberiza capensis) and the Southern Boubou (Laniarius ferrugineus), whose repertoire of calls can be regularly heard around the lodge. These are just some birds that can be seen or heard near or around the building. 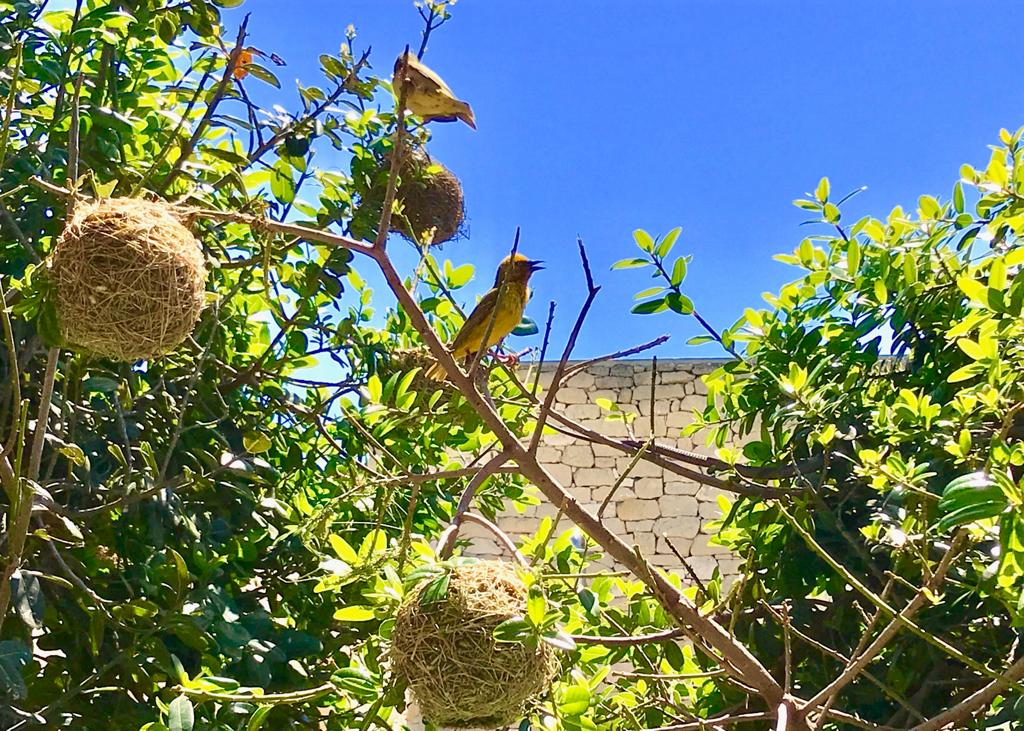 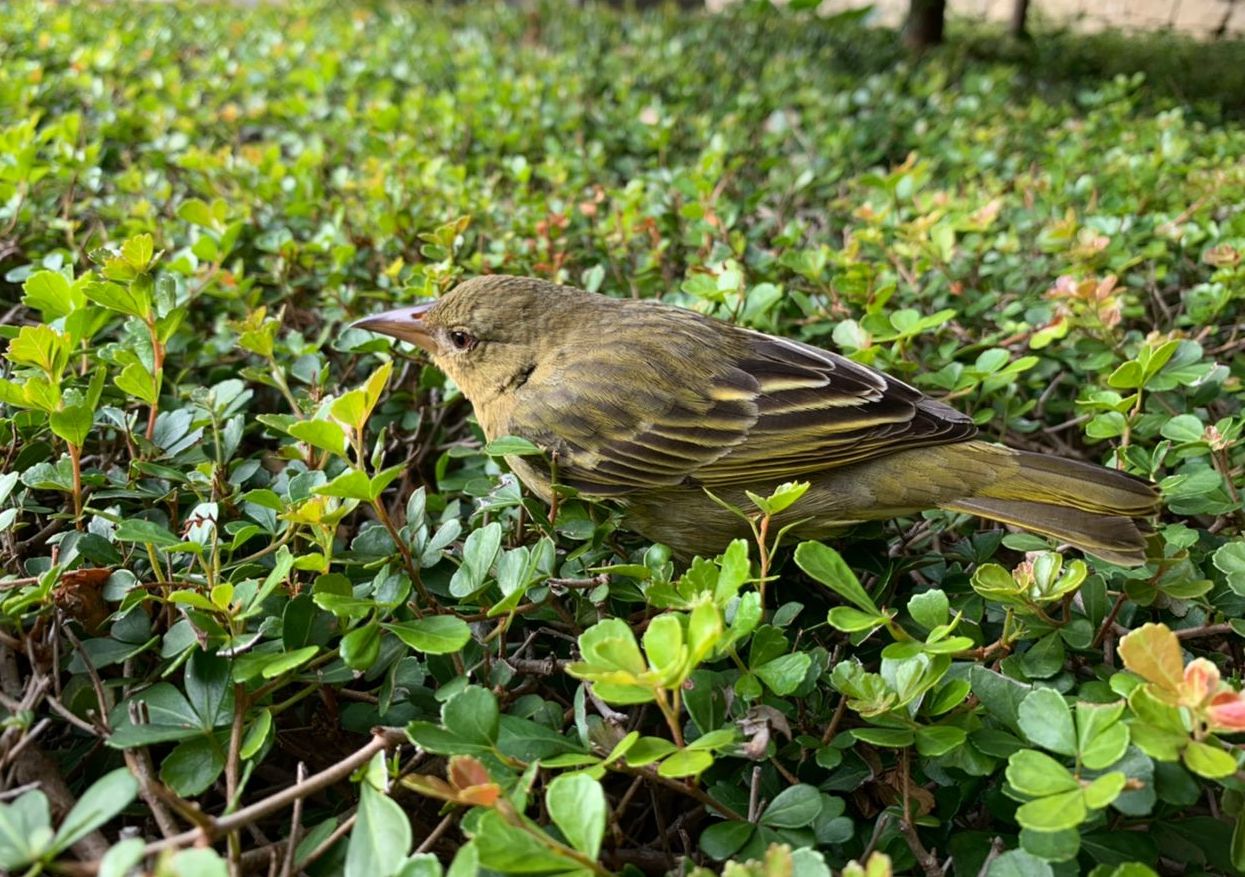 The De Hoop Nature Reserve is a geographical area of vast diversity - lowland fynbos, mountain fynbos, a rugged coastline, forests and an impressive vlei. With over 260 species of birds in the reserve and each landscape home to native species, there is no better place for birders wanting to tick off a wide variety of birds from their list. 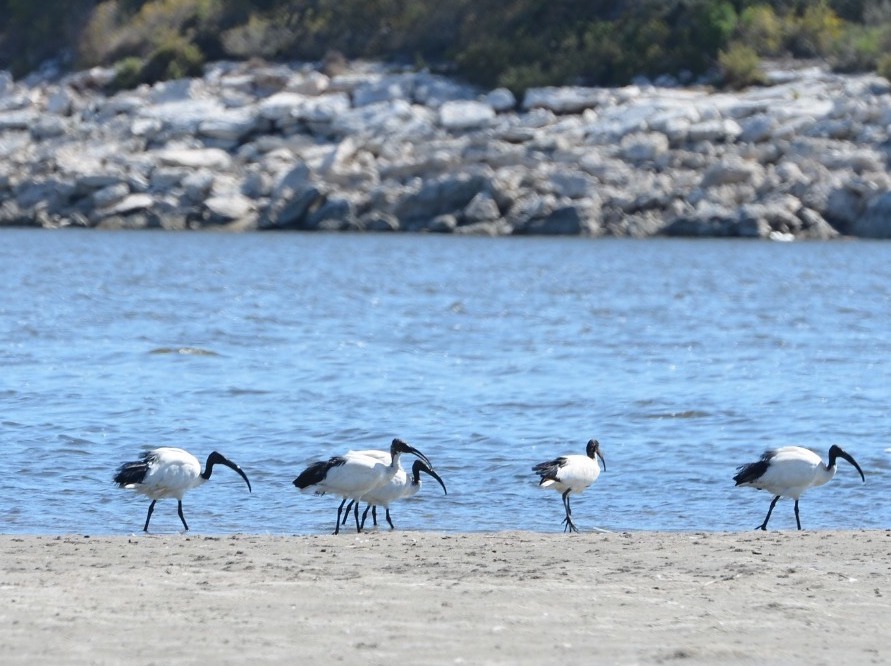 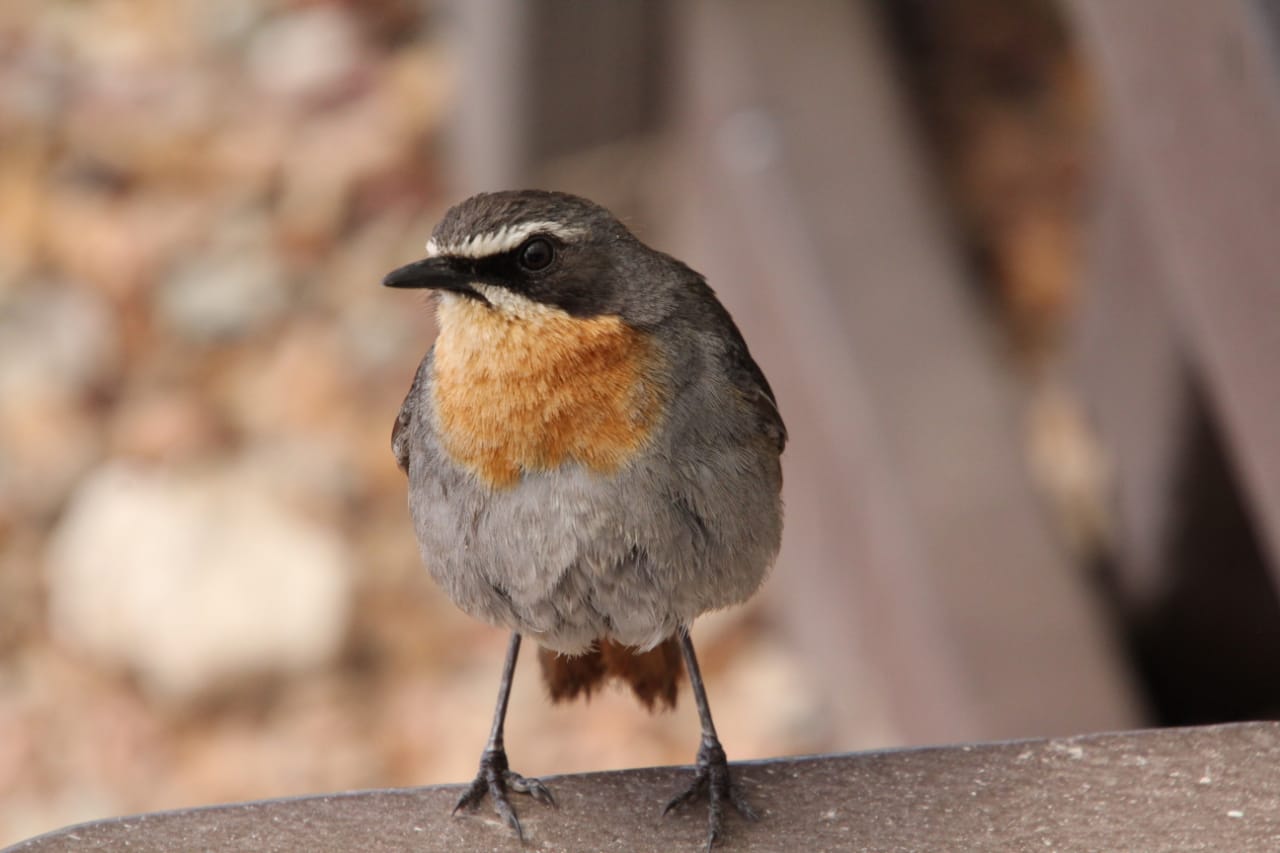 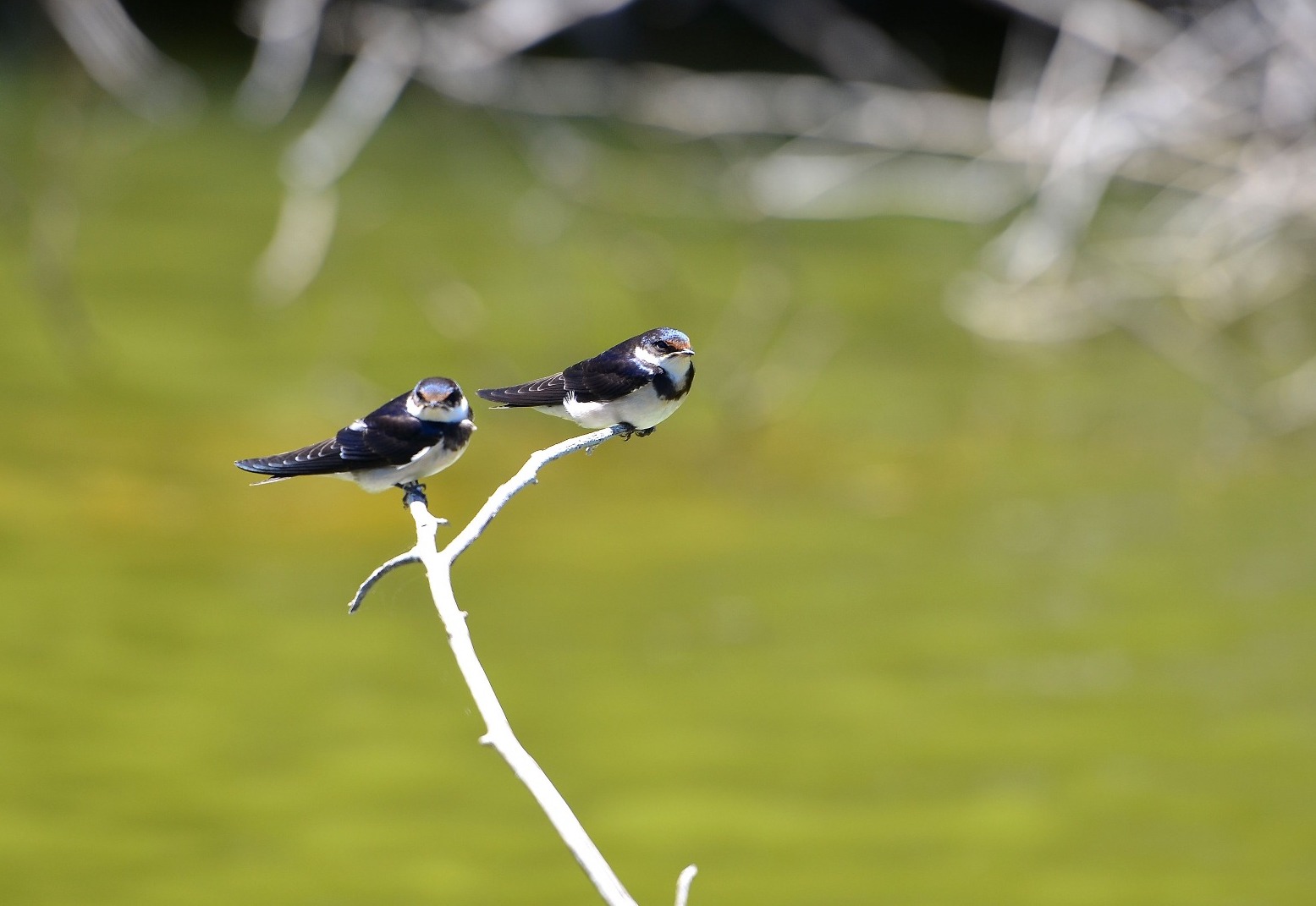